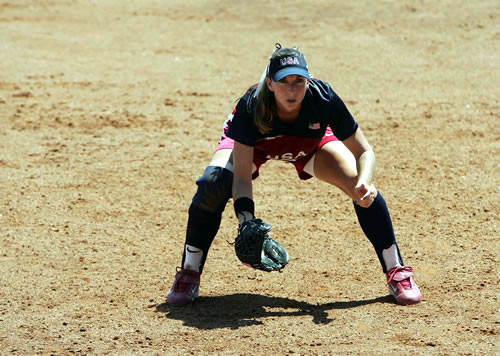 Three-time Olympic gold medalist for women’s softball, Leah Amico will be the featured celebrity speaker at the Huntsman World Senior Games opening ceremonies, offering her insights to thousands of senior athletes and community members on what it takes to be a champion. The ceremonies take place on Tuesday, October 8, 2019, at Dixie State University’s Trailblazer Stadium. The Games open at 6:00 p.m. and the show, which will include singing, dancing and fireworks, begins at 7:00 p.m.

The opening ceremonies are free for everyone and a shuttle to various campus parking lots is also available without charge.

Born in Garden Grove, California, Leah Amico graduated from Don Lugo High School in nearby Chino in 1992 and attended the University of Arizona. Playing for the Arizona Wildcats softball team, she was named to the First Team All-Pac-10 for her freshman efforts. At the 1993 Women's College World Series, the Wildcats faced rival UCLA in the finale and with the only hit allowed, she drove in the game-winning run. It was Arizona's second title. And the wins, titles and accolades continued to accumulate.

In the Atlanta Olympics, Amico was the only collegiate athlete selected to the roster and hit .300 in 7 games and was perfect at right field. At the 2000 Sydney Olympics Amico nabbed hits in games with Italy, Japan, China and Australia. She was also instrumental in one more gold medal performance for team USA in 2004 at the Athens games.

The Huntsman World Senior Games is the largest annual multi-sport event in the world for athletes age 50 and better. The Games take place every October in St. George, Utah, USA and welcome over 11,000 athletes from all around the world. The opening ceremonies is a celebration of peace, health and friendship.