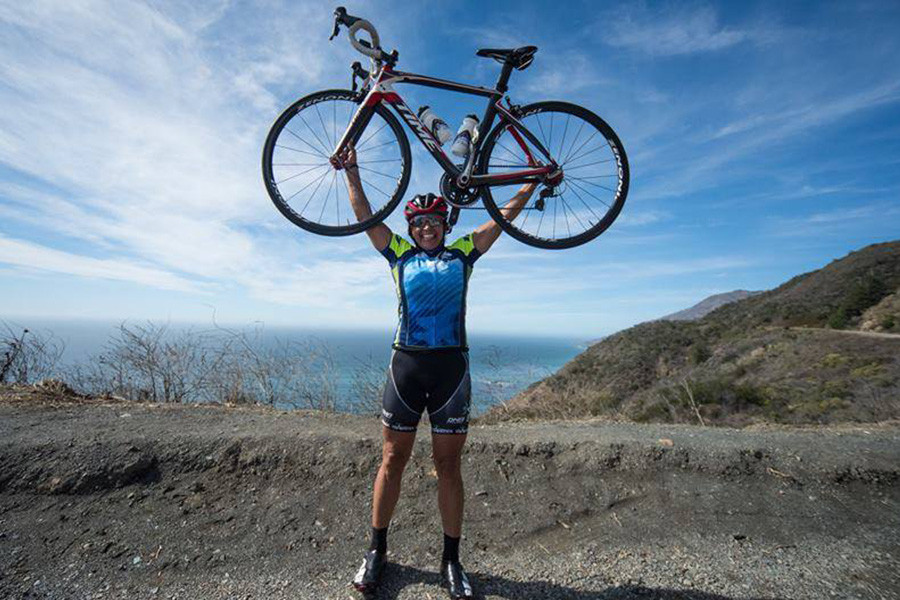 A condensed version of this interview originally appeared in the Spring 2021 Timeout Magazine.

Timeout Magazine: Where did you grow up?

Lorri Zenoni: I grew up in Southern California. I lived in Fontana, Rialto and San Bernardino from birth to high school. Went to college in Los Angeles, CA, San Bernardino, CA and Loma Linda, CA. I currently live in Sandy, Utah although my husband and I have a travel van that we spend months in at a time.

TM: Tell us about your family (siblings/spouse/children/grandchildren).

LZ: My husband, Dean, is a US Marine that served our Country for 24 years. We started riding road bikes after he retired and found a group that introduced military veterans to cycling as a form of healing and therapy. I wanted to ride with him as part of his healing journey. I have one brother, Joe, that is 2 years younger than me. He lost his wife to cancer a couple years ago and is raising his 2 children as a single parent. I also have one son, Chase, that is 24 years of age, graduated from college and lives in Arizona. I have a Bonus son, Hunter, that is 20 years of age and is in the Marine Corps, following his father's footsteps.

TM: Tell us about your college/career.

LZ: I have a Bachelor of Science in Food and Nutrition, a Master's of Science in Health Administration and a Doctorate of Public Health in Preventative Care and Lifestyle Medicine. I worked in school nutrition and education for 23 years. I have taught high school and college courses and I worked in College Health as a Health Care Administrator for 8.5 years.

I have also been a nutrition and health coach for over 30 years and have personally helped improve the health of over 1150 people. My goal for 2021 is to personally help 100 people improve their health. In January, I have helped 12/100.

In addition, I started a non-profit with my husband to support military veterans to lead a healthy lifestyle post service incorporating cycling and nutrition.

Finally, I authored a cycling and lifestyle book called "Ride Faster with Less Time in the Saddle". I donate $1 of every book sale to the Semper Fi and America's Fund to support combat wounded, ill and injured military Veterans. I published the book in September 2020 and have made a $154 donation to the Fund as of December 31, 2020.

TM: Have you always been involved in sports? If so what sports? If you started competing later in life at what age did you start and motivated you?

LZ: My father was a highly competitive athlete and set track records at his high school that stayed for years. I was encouraged at a young age to get into sports and played neighborhood and playground games, but started playing softball on a team in 6th grade. It was at this time that I became overweight and was bullied for my weight. My father thought playing softball would help me. I would go on to play softball through high school and college and found I had a very competitive nature.

After college, I took up running and weight lifting to stay active. In graduate school, I continued to run and lift weights to maintain my health and sanity through the tough years of school.

After my child was born, I started to mountain bike as I could pull my kid trailer behind me. I also became the Pony Baseball League President for 2 years to encourage other young people to get involved in team sports. I then explored martial arts and became a kickboxing instructor. I loved the hand-to-hand combat as well as the grappling aspects of martial arts and decided to fight in a boxing match. I was too old for amateur competition so received a professional license to box in the state of California. I fought 2 professional fights with a one draw, one loss record and decided it was not the kind of competition that would keep me healthy.

I also like to snow- ski, water- ski, paddle- board, weight-lift and hike. I really do love to be active.

I was introduced to road cycling when my husband rode a 7-day bike ride from San Francisco to Los Angeles as part of a military non-profit experience in 2010.  He knew he wanted to ride more, so we both bought road bikes and started with local rides. We took two trips to Europe (France in 2012 and Belgium/Luxembourg in 2013) with the non-profit and ride both countries for over sseven days, exploring battle sites and history. That progressed into us starting a race team for military veterans and their supporters as well as our own non-profit.

I would eventually go on to earn a Cat 3 USA cycling license, several State Championships and a World Time Trial race in 24 hours.

I was introduced to the Huntsman World Senior Games by a cycling official, Louise Bywater. Louise was a local cycling official in my area and I saw her several times a week. She saw that I was eligible to compete my 50th year and encouraged me to sign up. I was hesitant at first, as I wasn't sure I wanted to compete in the "senior games." I told her I didn't feel like I was a "senior". She explained the age categories and classes. She kept asking me every week if I had signed up yet. Finally, the last week before registration was closing, she said to me, "Go home and sign up. I want you to tell me tomorrow that you are signed up." So, I did. I remember rolling up to the start line of the race and saying, "Louise, I did it." She and her husband Gary had big smiles on their faces and told me that I was going to love it. She was so right. I met so many friends that year from all age categories and classes. I loved to see female cyclists in their late 80's riding up Snow Canyon State Park on an upright bike. I knew I wanted to be like them. The comradery and friendships made there are priceless. We even found local friends that had already been competing for years and it became a week-long party.

Louise lost her battle with cancer in 2020, so my next Huntsman World Games competition (2021) will be dedicated to the woman who brought me there.

TM: Why do you value the opportunity to compete?

LZ: While I have said that I have a competitive nature, I have found that my biggest competition is with myself. I love to push myself and see what my body can do. Competition may teach me about winning and losing, but it also teaches me more about myself. It teaches me about resilience, perseverance and tenacity. It also teaches me about self-esteem and helps me with planning, scheduling and organization. It helps me with motivation and drive and helps to get me out the door. While I may win races and stand on a podium or get to cheer on those who do get to stand on the podium, it is an honor for me to compete in any sport. To know that I can train so I can be healthier, is the ultimate goal. Health is a journey for me, not a destination. So, every day is another opportunity to improve my health.

Ultimately, to show up at any starting line is a victory. It means I am healthy enough to be able to compete with myself and test my abilities for THAT day. Anyone can win or lose a race on any given day. But to show up on the starting line and give it your all is a victory, no matter where that lands you on the podium.

TM: What does active aging mean to you and why is it important to you?

LZ: Active aging is a way of life for me. Healthy living is my lifestyle. My goal is be fully engaged in life, every day. It is up to me to choose health and happiness. It is my body that I was blessed with and I don't get another. Therefore, I want all of my years to be filled with quality. I want to make it a point to thrive every day. Health, wellness, fitness and well-being are core values for me. They have been for years. I am blessed to have parents that instilled healthy living habits at a young age. I have spent my life and my career living these core values.

I want my years to count, not only for me but for those around me. I consider myself a life-long learner and I learn more everyday what my body can do. I also learn how I can help others to be their healthiest version of themselves as well.

While I strive to live an active healthy life, I also want to help others do that same thing.