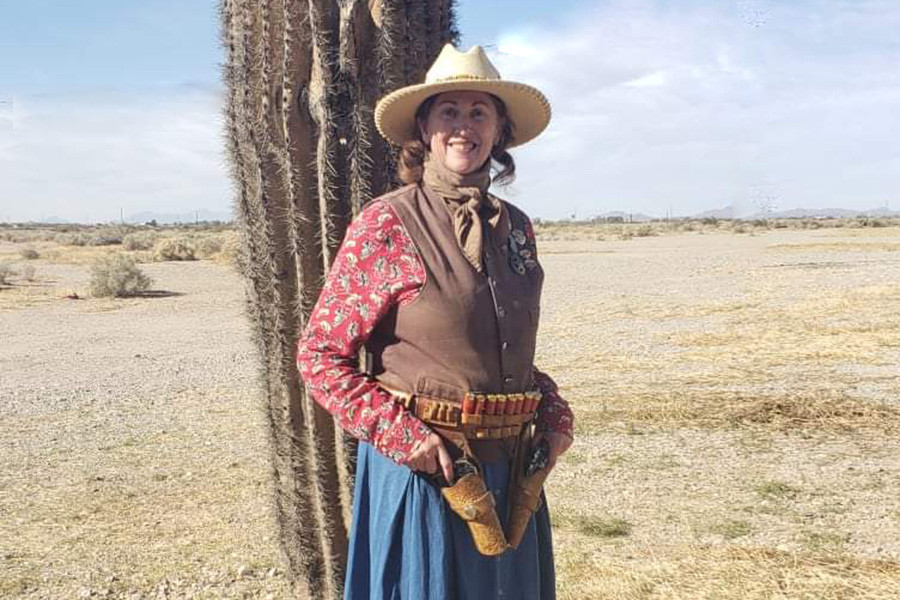 LeAnne Lane (AKA Alberta Annie) along with her three sisters and two brothers grew up near the small town of Rosemary, Alberta where her family was active Pro Rodeo Stock contractors. Life was very busy with lots of chores and responsibilities but she was allowed play whatever school sports she desired and there were many.  Lane played volleyball, basketball, badminton, was a cheerleader for the boy’s teams, and also played baseball. She swam in the irrigation canal in the summer to ward off the blistering southern Alberta heat.  And of course, she did all the typical rodeo things that girls were allowed to do at the time. At the age of 17 Lane took up down hill skiing as a leisure activity.

Lane and her husband have a ranch in Southern Alberta and that’s where they spend their spring, summer and early fall – they winter in Arizona.  The Lanes had a small ranch vacation business for many years and hosted guests from around the globe.  Once they decided to semi retire, they needed something to fill the void of, kids, grandkids, guests, etc.  And Lane needed something desperately to fill in for the game of slow pitch which she played until she was 47 and curling which she played until she was 55 years old. (She would still be playing and competing in both but back injury made it less enjoyable.)

Enter Cowboy Action Shooting! “And I love the sport, the people, the challenge of competing against folks of all ages from all over the planet.  Fellow competitors would give you the shirt of their backs, their guns, their ammo...whatever it might take so you can compete,” Lane said. “You don’t find that often in competitive sports.  The scenarios challenge your brain and you’re always striving to find a quicker way to engage the targets and handle the firearms.  And it speaks to my competitive sole.”

Lane believes to live actively you need to keep moving, challenge your brain, mind, body to continue to do the things you love to do.  You may not be the fastest or the best but you’re participating and this is the key to active aging.  Her granddaughter is in a sports medicine program and one of her assignments was to interview a senior about their fitness level and why it was important to them.  The granddaughter chose Lane. “I told her that the terrifying reality that if we don’t move it, we’ll lose it, motivates me every day to be the best I can be,” Lane said.  “There was a lengthy silence on the other end of the line as I suspect not only could she not fathom not moving herself but also that her grandmother might not be able to move either, as she has seen me as an active aging senior her whole life.”

Lane has won many honors and accolades in her many sporting endeavors but the one that is most important to her is the Cowgirl of Honor award she won at the SASS National Championship of Cowboy Action Shooting in 2018.  This award is voted on by your fellow competitors and given to the Cowgirl who exemplifies the “Cowgirl Way”.  Someone who supports and encourages new shooters and fellow competitors, gives back to the CAS community and lives by example.  Thank you Alberta Annie for being that Cowgirl!