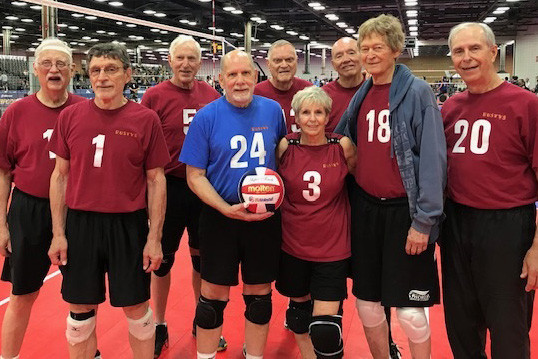 If you were to pass Ginger Rhodes walking down the street, you might make several assumptions. Assumptions like she is active and takes care of herself. You might even assume that she is an athlete. But what might not be so obvious is that she an athletic barrier breaker.

Ginger was born in 1938. Her family lived in San Francisco and most of her growing up years were in California. But she also lived in Colorado and Arizona. Her parents had five sons and three daughters. “Having had five brothers, it is understandable that I became quite a tomboy,” Ginger observed.

In 1955, Ginger married her husband, Dick. The family moved to Prescott, Arizona in 1958, where they still reside. Over the years, the family has grown to include the daughters, six grandchildren and 13 great grandchildren. Since Ginger’s siblings were not a very close unit, it was important to her that she raise a close family of her own. “Our large family has managed to stay and play together through camping, water sports, etc.,” said Ginger.

At the age of 23 Ginger began playing softball - both fast pitch and slow pitch. About 28 years later she became interested in track and field – winning many gold medals during the few years she was active. The at 70 years of age she decided to compete in a half marathon. In addition to organized sports, she has stayed active waterskiing, hiking and lifting weights.

Getting back to being an athletic barrier breaker, Ginger has played volleyball at a gym in Prescott that offers volleyball five days a week to men and women over 18 years of age.  “Of course, we have some very strong competition there, and I am very pleased to still be accepted so well by this group,” said Ginger. “My long-time team mate, George Hedge, also plays in this group and we are fondly referred to as Prescott Volleyball's "Senior Seniors", at ages 82 and 83.  We both still get compliments on our play, and are often told by younger players that they hope they can play like us at our age.”

George had been playing with a team the captain said he was having trouble finding a second setter for the team.  George suggested Ginger, but the captain was hesitant – a lady playing on a men’s team? He finally decided to give her a try.  After the first set he was already recruiting her to play with the team at the Huntsman World Senior Games that fall.  George noted that she very quickly won over all the guys on the team, and is now well known to their usual opposing teams as well.

“Having grown up in an era and a location where there were no opportunities for girls' sports, I particularly appreciate the opportunity to compete as an adult. Beyond the physical aspect of competition, tournaments such as the Huntsman World Senior Games provide a wonderful opportunity for establishing long-lasting friendships. It is also clear that the Games organization places a high premium on the health of its participants, based on the content of its website and in providing the health screenings at the Games.”

You can watch Ginger play at the Games this year as she continues to break barriers and suprise people on the volleyball court.